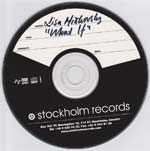 
The 2nd single from Lisas debute album. This is a strange one. It's the slimcase and artwork from

the original 1st release of the 3-track single but with the text "Ny text" (new text) written on the slimcase.

Inside you find a Stockholm Records CD-R with the handwritten label "What If". This is a Promo for the

"new version" of the song that was sent out in a hurry to radiostations after 9/11. I guess the record

company re-used some cd cases when they had to change the lyrics and wanted to send out the new version fast...

And I also guess that they made a large bonfire with the old CDs that was in these slimcases from the beginning.

The words "the plane" is changed to "my life" in the new lyrics.

I added "v1" to this one, since I later found a copy of the same CD but in a cardboard case instead.