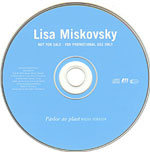 
You can say that this is the first "solo" record with Lisa Miskovsky. This is a promo single with a track from the Swedish

movie called "Det Blir Aldrig Som Man Tänkt Sig". The song is also on the soundtrack album, but in an "album version".

The album isn't that easy to find anymore but easier to find than this promo single. This song was never released as an ordinary

single and does only exist in this promotional version.